Christian families are displaced in Iraq

Photo: IRIN BAGHDAD, 26 October 2008 (IRIN) - Fewer Iraqi Christian families are fleeing their homes in the northern province of Ninevah thanks to the heavy presence of security forces, but families who already fled anti-Christian attacks over the past few weeks are living in difficult conditions and are still reluctant to return to their homes, a local aid official said on 25 October.
"They are experiencing hard living conditions in the places they have ended up despite receiving aid on a daily basis," Falah Hilal, head of the provincial department of the Iraqi Red Crescent Society (IRCS), said.


"Most of these families have ended up cramped in small rooms in churches and monasteries while others joined relatives or friends in their houses. Their children have left schools and employees can't go to their offices," Hilal added.

Hilal said that the IRCS had not registered any new displacements among Christian families over the past week as security forces had deployed in the areas where Christians lived.

"Yet we didn't register any return of families to their houses either," Hilal told IRIN.

Anti-Christian violence in Mosul, the provincial capital of Ninevah and some 400km north of Baghdad, erupted on 4 October when gunmen started assassinating Christians and threatening others, telling them to leave the city.

On 24 October, the UN refugee agency (UNHCR) estimated that more than 2,200 families, or some 13,000 people, had fled their homes since 4 October. UNHCR said this represented about half the province's Christian population. It added that about 400 families had crossed the border into Syria while others had gone to safe areas to the north and east of Mosul and others to neighbouring Dahuk, Erbil and Kirkuk provinces.

"Many left with little money and need help," the UNHCR statement said, adding that it had delivered relief supplies to over 1,700 Christian families.

Police estimated that 12 Christians had died in the violence. The latest incident was on 13 October when gunmen broke into a music store in Mosul killing its Christian owner and injuring his nephew.

No group has claimed responsibility for the attacks but Sunni extremists are believed to be behind the campaign, which is taking place despite US-Iraqi operations aimed at routing insurgents from remaining strongholds north of the capital.

The newly displaced 13,000 Christians add to the more than 4.2 million Iraqis who have fled their homes since the US-led invasion of Iraq in 2003, according to UNHCR.

Of these, about 2 million are living as refugees in neighbouring countries - mostly in Syria and Jordan - while the remainder are displaced within Iraq.

RALLY OF INDIAN CHRISTIAN CHURCH IN USA
before UN headquarters - NY - October 2008
Against hindu caste system and the recent persecution, rapes and deaths in Orissa 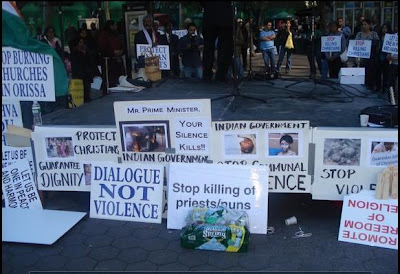 News from By Brother Satish/Chicago Revival 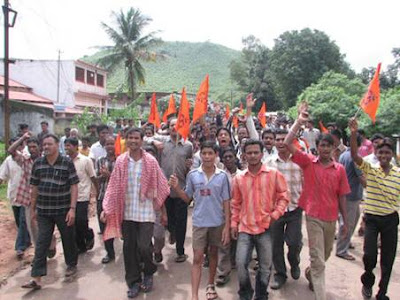 ASHOK SHARMA
The Associated Press
Tuesday, Oct. 14, 2008
"NEW DELHI - Indian church leaders said Tuesday that Christians killed in recent clashes were "sacrificial lambs" targeted by hard-line Hindus seeking an advantage in upcoming national elections.
The All India Christian Council said the toll after nearly two months of sporadic violence has reached 59 dead and 50,000 displaced. Officials in the eastern state of Orissa, site of the worst violence, say 34 people have been killed.
The recent violence began after Hindu activists blamed Christians for the slaying of a Hindu leader killed in Orissa on Aug. 23. Retaliatory attacks left scores dead, dozens of churches destroyed and thousands of people homeless, despite the government's claim that Maoists killed the Hindu leader.
"A frenzied and well-armed band of political criminals has threatened our community as perhaps it has never been in its 2,000 year-old history in India," said John Dayal, secretary-general of the All India Christian Council.
There is a long history of tension between the religious groups in Orissa because Hindu leaders accuse Christian missionaries of forcing low-caste Hindus to convert, charges denied by Christian leaders.
Leaders from the council on Tuesday said the violence was led by hard-line Hindu parties preparing for national elections, expected early next year, by whipping up religious fervor.
"The sole motive is to gain political advantage in coming national elections," said Dayal. "We have been made sacrificial lambs."
The Christian leaders blamed the violence on radical Hindu groups, including the Bajrang Dal and the World Hindu Council, organizations loosely affiliated with the hard-line Bharatiya Janata Party. The BJP rules Orissa and Karnataka, the two states that have seen anti-Christian violence, and is looking to challenge the ruling Congress Party for power in New Delhi.
Roughly 2.5 percent of India's 1.1 billion people are Christians, while more than 80 percent are Hindu. India is officially a secular nation.
The Christian leaders called Tuesday for a federal probe into the violence"
Source: The Washington Post

ALL WORLD NEEDS TO KNOW!
WHAT HINDU FUNDAMENTALISTS FROM VHP* ARE DOING AGAINST CHRISTIANS IN INDIA:
* Vishaw Hindu Parishad
By Joao Cruzue

They are murdering , blazing, rapeing, burning christians and their homes and churches, in the name of the culture and hindu religion defence. VHP leaders in India think that to convert a Dalit or people from "depressed" class, how they mention, is a attempt against India culture, that is, nobody shall preach any freedon word to Indian Dalits unless they have to die in their poverty, misery and "karma".

I think not one religion in this world has the right of preaching murdering, slavery, misery, poverty, burning people in the name of one culture. A shameful culture! And below is a table I built with figures from the shameful persecution of Hindu fundamentalists in some States from India. 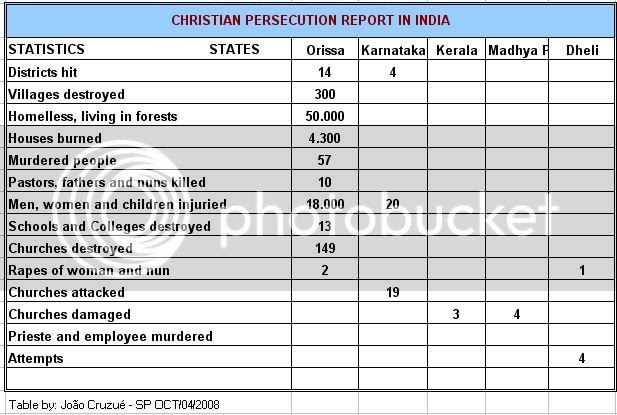 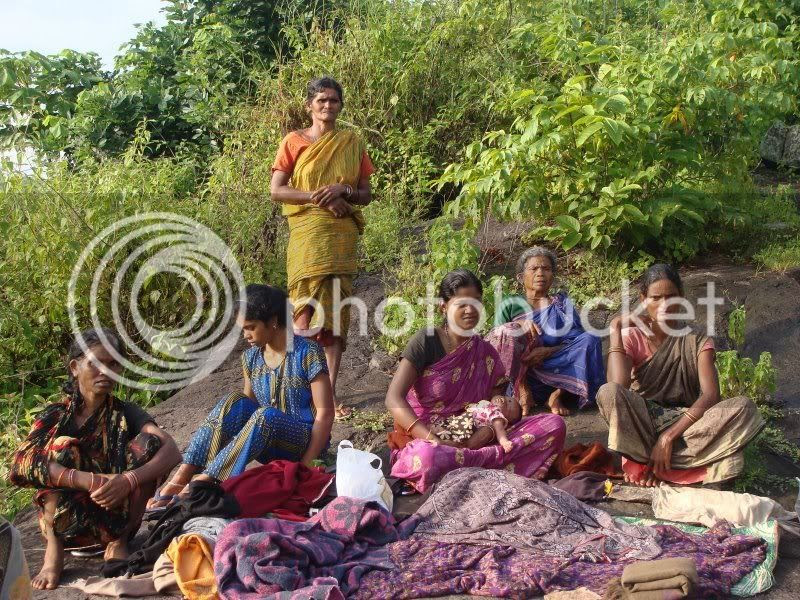 Thousands of families banished from their homes by VHP fundamentalist groups
50,000 homeless are living in Orissa State forests.

SHAME ON INDIA GOVERNMENTS, MAINLY FROM ORISSA
To send a letter to Indian authorities, mailto: indiaportal@gov.in

To: Authorities over Bharat

With all respect, and considering that I have some good friends in India, I cannot be silent as that facts always reported from Orissa State that have been occuring since Last Christmas, better: since 1999.

I know very well India has quite 1.000.000.000 inhabitants and all of you in charge of this Country have something more important to do than to take care of religons conflicts between VHP and christians. And maoists...

But one thing you can no more letting to do: put a end on that situation, because now, everyday, milions of people are looking at hundred of photos that are showing that bestiality may hapens within any religion, even in Hinduism.

I know you are tired of seeing, anyway I attached a dozen of pics that shame my indigenous friends - and me. 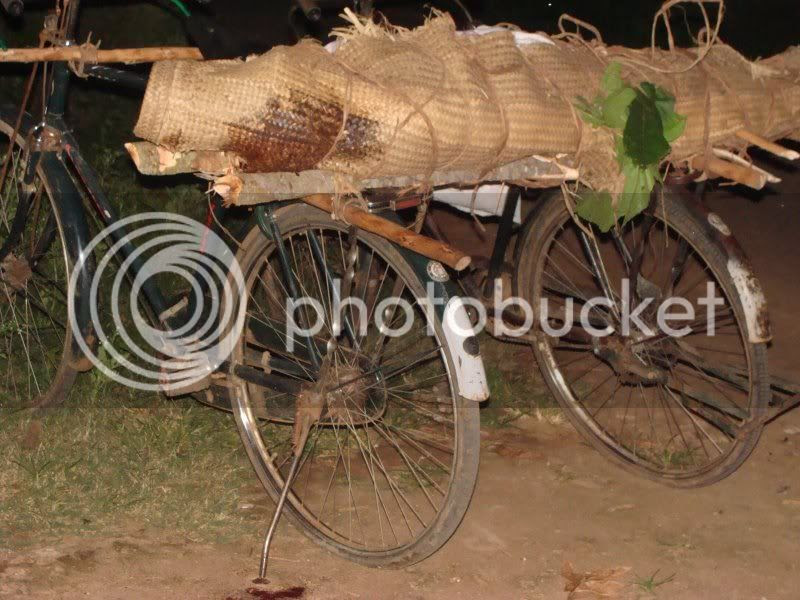 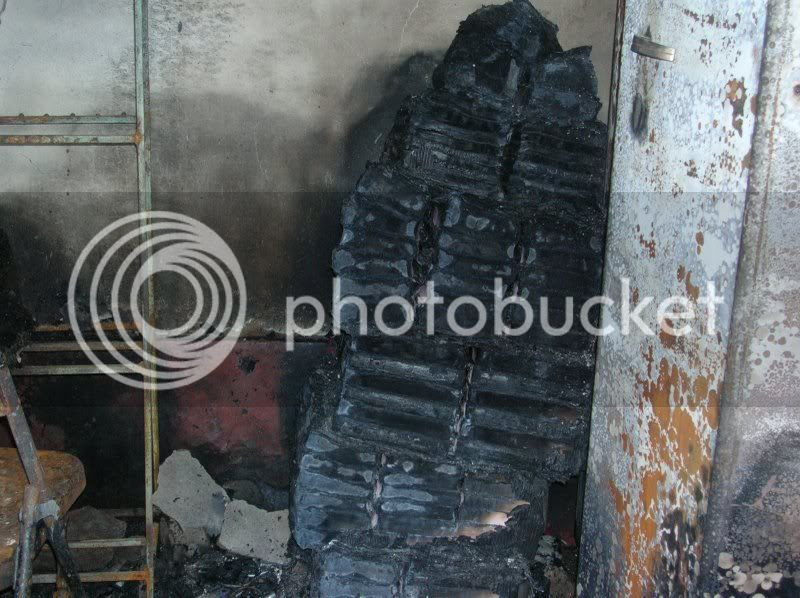 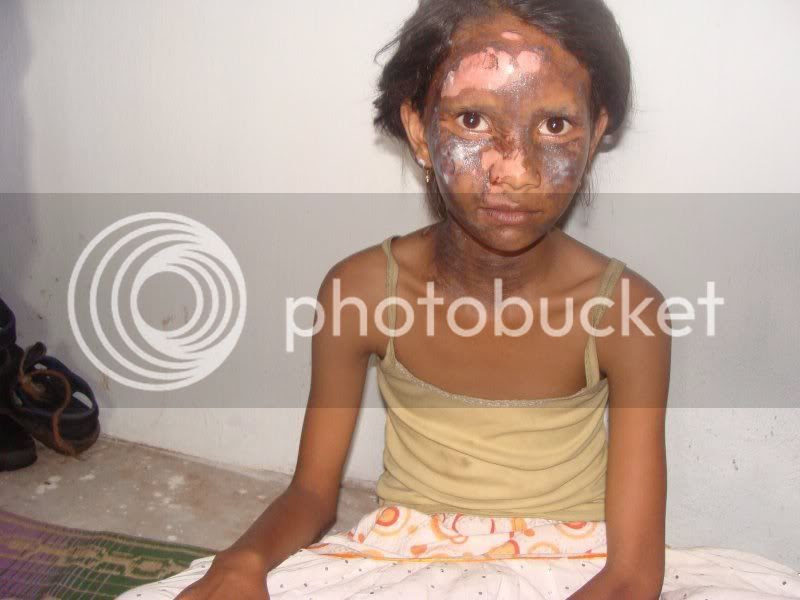